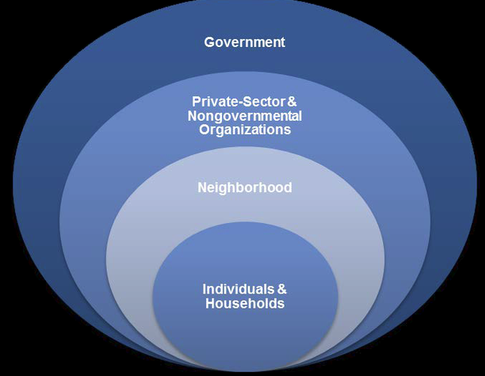 PURPOSE
Preparedness is the shared responsibility of all levels of government, the private and nonprofit sectors, and individual citizens.

Individuals and households are at the core of our Nation’s preparedness. A community’s ability to respond to or recover from a disaster depends on the level of preparedness of every member. However, a 2009 Citizen Corps National Survey found that 29 percent of Americans have not prepared because they think that emergency responders will help them and that over 60 percent expect to rely on emergency responders in the first 72 hours following a disaster. The reality is that in a complex disaster, first responders and emergency workers will not be able to reach everyone right away. In addition, providers may not be able to restore critical services, such as power, infrastructure, water for a very long time - months in the case of major road or freeway collapses. In a major event such as this it becomes imparitive that individulas - with the support of their neighbors - be prepared to fend for themselves.
​
It has long been printed by organizations such as FEMA, and others, that we all need to have enough supplies to last a minimum of 72 hours. This is no longer the case. In almost all of the training programs I have been involved in recently they stress a MINIMUM of 2 weeks and in some cases 4 weeks.

With that in mind it becomes pretty easy to overlay on the graphic above a 'time sequence' on each of the expanding concentric circles. For instance the first circle 'Individuals & Households we can think of as immediate. This may not EXACTLY be the case - for instance if children are home but the parents are at their place of employment at the time of a disaster. That is a topic that would be discussed at one of our 'Map the Neighborhood' meetings.

Next stepping out to 'Neighborhood'. We can think of that as beginning within the first hour. The 'Golden 60 minutes' as referred to in the 'Map the Neighborhood' program. The extend of time before getting to the next step out on our 'concentric circle' example is very fluid. It is very reasonable to assume you will be in this mode for a MINIMUM of 72 hours. The time that you see in print all the time as stated above. However based on the extent and type of the disaster this could be weeks. In the Cascadia Rising disaster simulation we did here in WA - through FEMA and 4 states - it was assumed the Cascadia Subduction Zone 'slip' would result in a magnitude 9.2 or greater event. In an event like that it was assumed - for purposes of the disaster simulation - that almost all - if not all - of the cell towers were down. Either due to damage or loss of power, personnel (at home taking care of their own families) of other uncontrollable factors. For whatever reason there will be no 'calling your mom in New York to say you're OK' kind of action going on. In this case we will need to punt to our own localized HAM (RACES) volunteers for communications. More on this in a 'CERT' training class.

So the next circle out is 'Private-Sector & Nongovernmental Organizations'. This circle becomes a combination of other internal circles not shown when we try and think and apply time frames to it. For instance the lowest level would be local HAM operators like myself that should have communications with the outside world. At least we can communicate needs and status reports on our neighborhood to local emergency responders. They may not be able to actually respond as quickly as we would like, but there really is a 'structure and plan' that FEMA and other pieces of the EMS have in place for 'mapping' and 'tracking' needs. This gives them at least one piece of a triage - until they can personally verify reports - and allows them to begin building a 'plan of action'. Remember we aren't alone in this future major disaster. The EMS system itself will be over-whelmed state wide, by potentially every single neighborhood needing some sort of assistance.

Now how long we stay in this circle before being able to actually make our step out to 'Government' is very much dependent on many factors. Accessibilty to the neighborhood on city streets is one example. We may be able to get some help with 'Nongovernmental Organizations' before we can expect Government help. These organizations would of course include the utility companies.

So I hope this helps you see that it COULD be weeks before we actually get high level Government officials showing up. Much more on all these things and the exact 'well how do we actually DO things in these rings' is what this WEB site is about. You will find more information in individual sections of this WEB site, but this section was just a quick 'Purpose' look. An opportunity to see intent I had in mind for making this information available to you - my MeadowCreek Park neighbors. (And Eastglen - they are trapped up in the NE corner and have to pass THROUGH MeadowCreek Park in order to leave, so I feel it is important to include that area in this disaster plan).